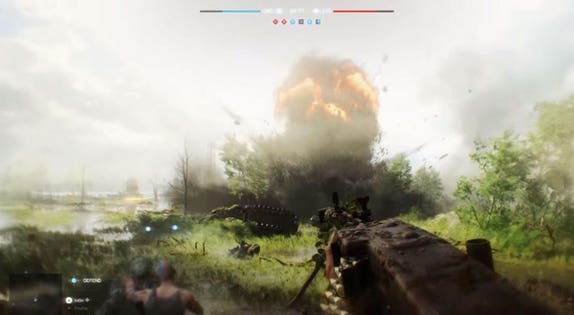 I feel like there’s a lot to like about Battlefield 5, the latest in the large-scale war simulator from EA and DICE. And yet yesterday’s reveal event was a strange thing, even with the hosting skills of The Daily Show’s Trevor Noah. It was light on gameplay and ended with a confusing reveal trailer, leaving journalists who saw the game at length scrambling to explain that no, in fact, Battlefield 5 is actually cool. This is not a great position to be in.

You only get one chance to make a first impression, and I worry about its chances, particularly considering what it’s up against. It comes right after Call of Duty: Black Ops 4 and right before Red Dead Redemption 2, and it could easily get lost in the shuffle. That’s what happened to Titanfall 2, one of my favorite shooters in the recent years–that was an even tougher loss because it lost to internal competition.

It’s a tough thing, because this assessment doesn’t have much to do with Battlefield 5 itself. Despite a somewhat confusing reveal, there seems to be a lot of interesting work going on here. The idea of telling months-long stories through the Tides of War system is intriguing, as are the large-scale, multi-match conflicts in Grand Operations. The addition of co-op mode is intriguing, as is some of what we’ve heard about destruction and construction. The game is pushing the squad more than ever, which could give some much-needed organization to the somewhat chaotic clashes in Battlefield 1.

Note: There’s also some sexist rage against the inclusion of women in the game, despite the fact that plenty of women served in World War 2, many of them in the sorts of special forces and resistance settings this game seems to be highlighting. I don’t expect that to matter much in the fall.

But that doesn’t mean Battlefield 5 won’t struggle. Battlefield 1 had a powerful hook and a mean launch trailer–it was a game set in World War 1, something nobody had seen before on this scale. It was brutal, fresh and a welcome change from Call of Duty’s sci-fi streak. The reveal was as weird as the Battlefield 5 reveal yesterday, but the trailer was more than enough to carry the day.

Battlefield 5 doesn’t have that hook. It takes place in World War 2, a conflict that we’ve seen before, we’ve guns and weapons we’ve fired in tons of games over the years. Last year it was a conflict we hadn’t seen in a long time, but Call of Duty: WW2 means that the FPS fans of 2018 have likely spent their time with an M1 Garand in recent months. The gameplay is apparently evolving in interesting ways, but those will likely be interesting only to Battlefield’s core audience: communicating to a wider audience is going to be tough.

Which brings us to the competition. Red Dead Redemption 2 is the sort of event that’s been anticipated by millions for years, and will dominate the conversation before and after its release. Call of Duty is a stronger franchise than Battlefield, and while Black Ops 4’s decision to include a battle royale mode might be a clear case of following the trend it’s still a smart move that will generate interest. Call of Duty and Battlefield are both well-established, older franchises, and that means they can have a harder time kicking up excitement for annual or bi-annual releases without a big head-turning hook. Battlefield 5 doesn’t have something like that, and so I worry. If it’s a truly excellent game it can still pick up steam in the long-run. But you only need to look as far as Titanfall 2 to see what some confusing messaging and bad release timing can get you.